Rania Khunaysir didn’t see it coming when she booked a last-minute Caribbean vacation for her young family.

The Toronto parent had no idea the airplane cabin would be fumigated with them on board when they landed in Jamaica, despite guidelines that say passengers should be clearly and repeatedly informed of the requirement before they fly.

“Suddenly there was an announcement on the intercom saying that [flight attendants will] be walking down the aisle spraying a non-toxic insecticide … I thought insecticide doesn’t sound non-toxic,” Khunaysir told Go Public about the family’s flight last August.

Khunaysir’s husband Randy Beharry and their three-year-old daughter are both asthmatic. The couple’s son, who was seven months old at the time, was also on the flight.

“I was worried about my kids.” Beharry said. “My asthma triggered probably within minutes. I had a hard time breathing,”

The experience left the family concerned about potential health impacts of the spray and calling for strict rules that require passengers to be clearly informed before they fly.

“I don’t want to be inhaling this pesticide,” Khunaysir said.

More than two dozen countries, such as Jamaica, the Dominican Republic and Mexico, require airlines to spray insecticides on flights that arrive from Canada. The process is meant to kill insects that could spread disease. 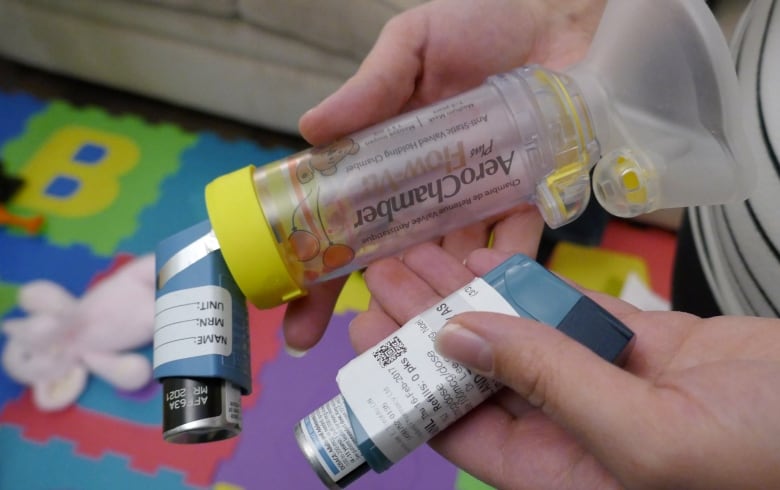 Beharry and his daughter are both asthmatic. He says his asthma was triggered after the plane was sprayed with pesticide and he had to use his inhaler. (Oliver Walters/CBC)

The World Health Organization has said it has found no evidence the sprays used are harmful to human health when they are used as recommended, but also says non-chemical methods need to be found.

The long-standing practice is raising concerns among some health experts.

“There is no such thing as a non-toxic pesticide,” said researcher Chris van Netten, a professor emeritus with the University of British Columbia’s school of population and public health.

He calls the widespread system of spraying pesticides “not acceptable” and said airline crew members and passengers need to be better informed and protected — especially children, older travellers and those with respiratory problems. 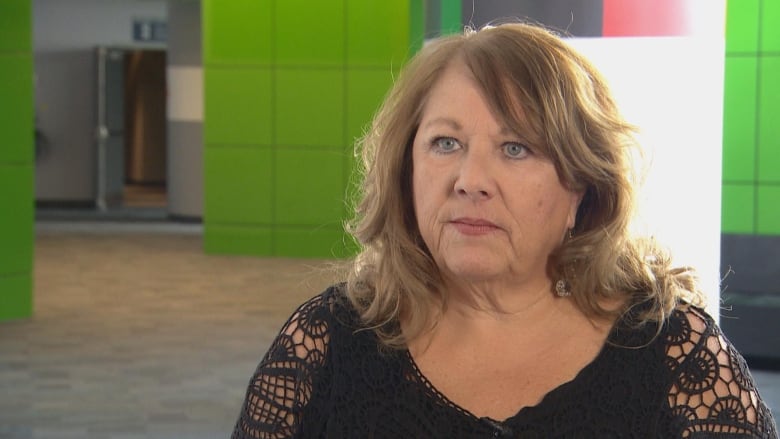 Josie Ball wants passengers to be informed about pesticide use before they get on a flight. She now brings a mask with her when flying to destinations she knows require spraying. (Robert Krbavac/CBC)

Frequent flyer brings her own mask

Frequent traveller Josie Ball from Selkirk, Ont., flies to Cuba several times a year with Sunwing and said she was shocked the first time she was on a flight where the cabin was sprayed.

She said people on her flight in April 2018 were coughing and wheezing.

“I think the public should have been aware … that there is a spraying in these countries … and [told] a little bit more about the chemical they’re spraying,” she said.

She now takes her own mask when she’s travelling to hotter countries.

Harlene Hart from Newington, southeast of Ottawa, was on her way to Cuba on another Sunwing flight in February, a birthday present from her boyfriend, when the cabin was sprayed with pesticide about an hour before they landed.

“Insecticide should be sprayed in a well-ventilated area,” she told Go Public in an email. “Not a sardine can with partially reused air.”

What upsets her most, she said, is that she wasn’t clearly notified before she purchased her ticket. She said she wouldn’t have taken the trip if she had known.

Canadian airlines are not obligated to let passengers know before they fly that the cabin will be sprayed with insecticide — despite studies cited by health experts Go Public spoke with who say the spraying can cause serious asthma attacks, skin irritations and long-term problems with the nervous system.

Transport Canada said there’s nothing it can do, but the transportation authority does acknowledge the practice could pose a “foreseeable hazard.”

The video below was posted by YouTube user ScottTheCoffeeGeek. It is unverified, but appears to show a flight attendant on a China Eastern flight carrying out the “top-of-descent” disinsection procedure, which involves spraying while passengers are on board.

Go Public found an advisory issued in 2009 where the department said passengers with respiratory issues need to be clearly informed before they fly so they can get “advice from their own physician … on whether they should travel to those destinations.”

None of the four Canadian airlines that travel to these destinations informs passengers using all three methods.

WestJet points out that disinsection is only required on four of the 20 countries it flies to, and two other airlines that fly to these countries — Sunwing and Air Transat — say they are complying with guidelines by putting the information on their websites and telling passengers who ask.

Air Canada also requires passengers booking online to click on a box agreeing to the airline’s “General Conditions of Carriage.” Halfway through that document there is information about the spraying being carried out on certain routes.

The airline also mentions aircraft disinfection on its “Health Tips” section of the website and provides a link to that section on the itinerary emailed to passengers who book directly with Air Canada.

However, passengers won’t see that link if they book through third party websites like Khunaysir did when she booked her Air Canada flight.

Van Netten, who has studied the effects of repeated exposure to pesticides, said the message that insecticide will be used in plane cabins isn’t getting through. He said airlines and Transport Canada can do better.

“People have a right to know what they are going to be exposed to.” 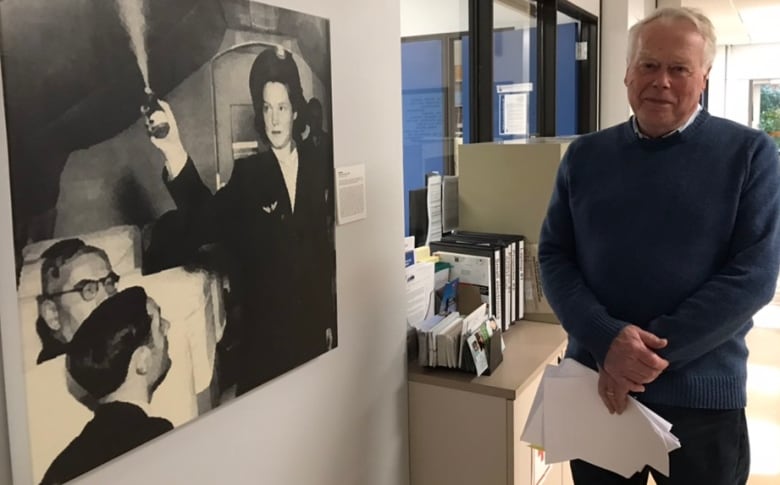 Researcher Chris van Netten at the University of British Columbia has studied the effects of spraying pesticides on planes. He says the practice is nothing new, but that passengers need to be better informed. (Ana Komnenic/CBC)

The practice of fumigating an airplane’s cabin started decades ago. It’s mandated by governments outside Canada and considered necessary to control potentially deadly diseases that can be transmitted via insects — such as malaria and yellow fever — before entering certain tropical countries.

Twenty-seven countries require Canadian airlines to spray. Two methods are used, according to the Transport Canada website: spraying aerosol insecticides in the cabin while passengers are onboard and treating the airplane’s interior surfaces before passengers board.

“Both of them have their problems,” van Netten said.

He said the second method leaves toxic residue on surfaces travellers eat and sleep on, noting recent studies have drawn a link between both methods of spraying and effects on the nervous system.

“Tingling in the fingers for instance — that’s how it would start. And it can go all the way up to a neurological impairment … but that takes a lot of exposure to get to that stage.”

The spray often contains an insecticide called Permethrin, a pesticide that’s been approved by the World Health Organization for what’s called “disinsection” on flights.

‘Report about skin peeling off’ 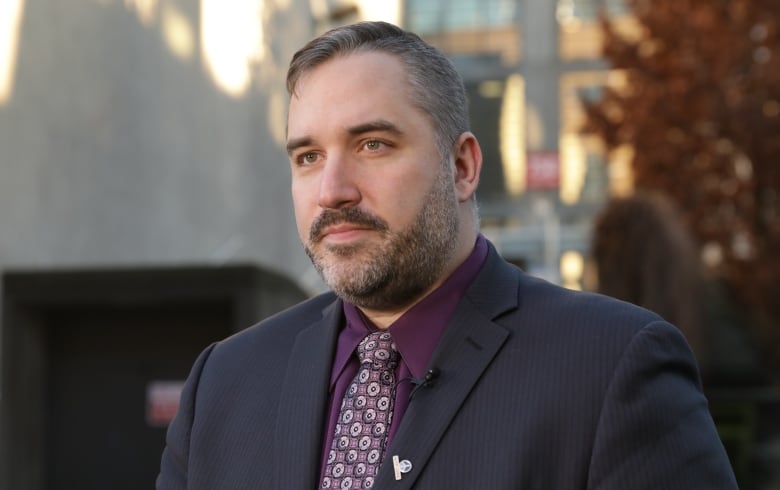 The union representing flight attendants in Canada is also worried about the spraying.

“We get reports of a sore throat, sore eyes … lots of skin conditions,” said Troy Winters, senior health and safety officer for the Canadian Union of Public Employees.

“I’ve got a recent report about skin peeling off of the inside of somebody’s hand and we had one fairly serious asthma reaction.”

He’s concerned about the long-term effects of repeated exposure on airline staff, saying some can be exposed to the spray more than 100 times during their career.

There are no industry-wide rules on what, if any, protective gear flight attendants wear while fumigating.

All the airlines say they provide training and safety equipment to staff.

Winters would like to see the Canadian government put pressure on the destination countries to reduce the use, suggesting a review of whether a flight leaving Canada in the dead of winter really needs to be fumigated.

There are 27 countries that require Canadian airlines to spray incoming flights with pesticide.

The search for a safe alternative

The U.S. has a law that requires airlines to disclose disinsection on their website and refer travellers to the specific section when they buy a ticket.

The Federal Aviation Administration’s Reauthorization Act also recommends the U.S. government work with WHO to find a “safe, effective, and nontoxic means of preventing the transportation of disease-carrying mosquitoes and other insects on commercial aircraft.”

There are non-spraying methods being developed, like a mechanical air curtain that blows everything out in one direction, but they are still in the testing stages.

WHO says the chemicals used pose no risk to human health when used properly, but when it reviewed current disinsection practices in 2018, it said there is a need for new “nonchemical” methods.

For now, travellers have few options — such as choosing to travel to countries that don’t require spraying, travelling with a mask to put on before the spraying starts and being sure to wipe down all surfaces on the plane when passengers settle in.

Khunaysir and Beharry say given the age of their children and asthma issues, they would have chosen another destination if they were told ahead of them that they’d be sprayed.

“I’m really surprised that they allow this to continue,” Khunaysir said.

“I would’ve had no problem saying, ‘Let’s change our destination, let’s go somewhere else, where they don’t require that.’ ”

Go Public is an investigative news segment on CBC-TV, radio and the web.

We tell your stories and hold the powers that be accountable.

We want to hear from people across the country with stories you want to make public.

Submit your story ideas to gopublic@cbc.ca.