A 37-year-old man was charged on Thursday with attempted arson, reckless endangerment and trespassing after he walked into St. Patrick’s Cathedral in New York City with two full gasoline cans, lighter fluid and lighters on Wednesday, police said.

The incident occurred two days after a massive fire severely damaged the Notre-Dame Cathedral in Paris, causing global shock and sorrow. That blaze was most likely the result of an accident though a major investigation is underway.

A New York City Police Department official said Marc Lamparello was charged with second-degree attempted arson, second-degree reckless endangerment and trespassing on Thursday after he entered the Roman Catholic cathedral in midtown Manhattan just before 8 p.m. ET on Wednesday and was confronted by a security guard.

As the man turned to leave, gasoline spilled onto the floor, and the guard alerted police officers stationed outside.

Lamparello told police he was taking a short cut through the cathedral to get to Madison Avenue from Fifth Avenue to return to his van, which had run out of gasoline, according to John Miller, deputy commissioner of intelligence and counterterrorism for the NYPD.

When police checked the vehicle they found it was not out of fuel, at which point the man was arrested, Miller said

Lamparello is a resident of New Jersey and a faculty member in the philosophy department at the City University of New York, but his name was no longer listed on the university’s website as of Thursday afternoon. Local media reported that he has previously been arrested in New Jersey for trespassing. He has no arrest record in New York, an NYPD official said. 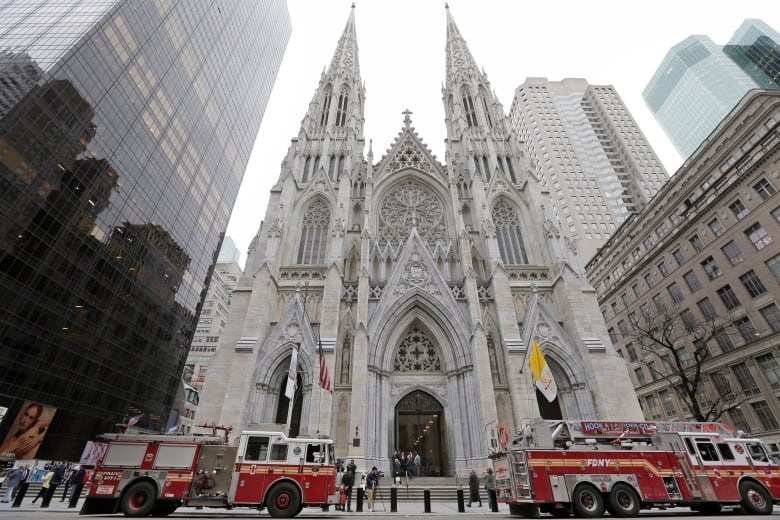 It was not immediately clear if Lamparello had a lawyer.

Officers caught up with Lamparello on Wednesday, and he was taken into custody after questioning, said Miller.

“An individual walking into an iconic location like St. Patrick’s Cathedral carrying over four gallons of gasoline, two bottles of lighter fluid and lighters, is something we would have grave concern over,” Miller told reporters.

Earlier this week, Lamparello was charged in Essex County, N.J., with resisting arrest, interfering with the administration of law and trespassing after he “refused to leave” the Cathedral Basilica of the Sacred Heart in Newark, N.J., on Monday at closing time, the county sheriff said.

Asked if terrorism was a possible motive in the Wednesday incident, Miller said it was “too early to say that.” But, alluding to worldwide publicity about the Notre-Dame fire, he added: “This is an indicator of something that would be very suspicious.” 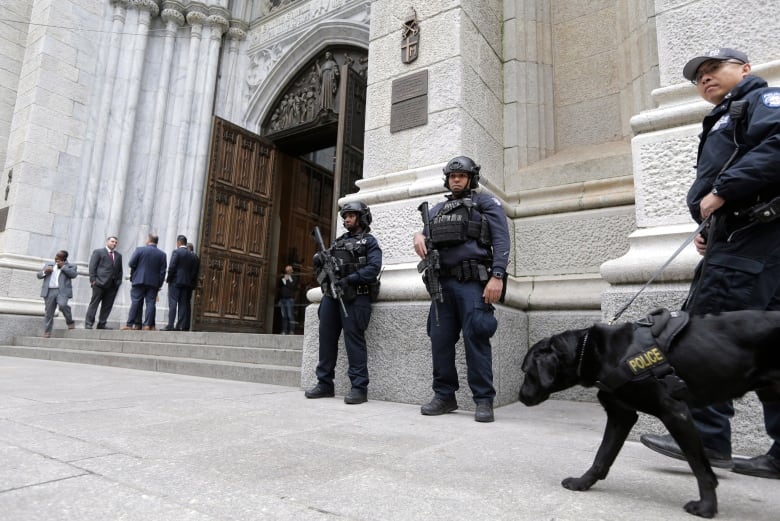 A larger-than-usual security presence is seen at St. Patrick’s Cathedral in New York after Lamparello was arrested. (Seth Wenig/Associated Press)

Lamparello’s alleged arson attempt comes only a few weeks after a man was arrested and charged with arson and hate crimes for burning down three predominantly African-American churches in Louisiana between March 26 and April 4.

St. Patrick’s, a neo-Gothic church across from Rockefeller Center, has stood in the heart of Manhattan since 1879 and is considered one of the most important symbols of the Catholic Church in the United States.