Thousands of students across Alberta plan to walk out of class Friday morning, as part of the provincewide student-led protest of the new provincial government’s stance on gay-straight alliances (GSAs).

A group of students at John Maland high school in Devon, a town of 7,000 south of Edmonton, will be among them.

“Adults are making decisions that aren’t going to affect them, but are going to have consequences for students,” said Meghan Sutherland, a Grade 12 GSA member organizing the school’s protest.

“We’re going to show that we have a voice and we’re standing together.”

The school’s first gay-straight alliance was created a few months earlier in response to concerns over the UCP’s opposition to the NDP introduced legislation, Bill 24, Sutherland said.

The legislation created a framework to allow any student who requests a GSA at their school the right to form one, and prevents school administrators from informing parents if their children join one of these clubs.

Premier Jason Kenney, who stepped into office three days ago, has said that the UCP’s proposed Education Act, which would replace the bill, would still protect GSAs.

At an Edmonton event in March, he said and that parents would only be notified of their child’s involvement by school staff in rare cases.

But that hasn’t eased some people’s concerns that students would be harmed by the repeal of the policy.

“Certainly many of my students aren’t necessarily out to their parents, or if they are, it’s already a rather contentious issue at home,” said Kevin McBean, a teacher and the GSA faculty sponsor at M.E. Lazerte School in Edmonton.

The club, which meets twice a week at the school, is mostly a social space for kids to make pizza, watch movies and discuss social issues, said McBean.

“The GSA provides them with a space where they can be themselves and just connect with other people, and so I think they are fearful that these kinds of policies could hurt them,” he said. 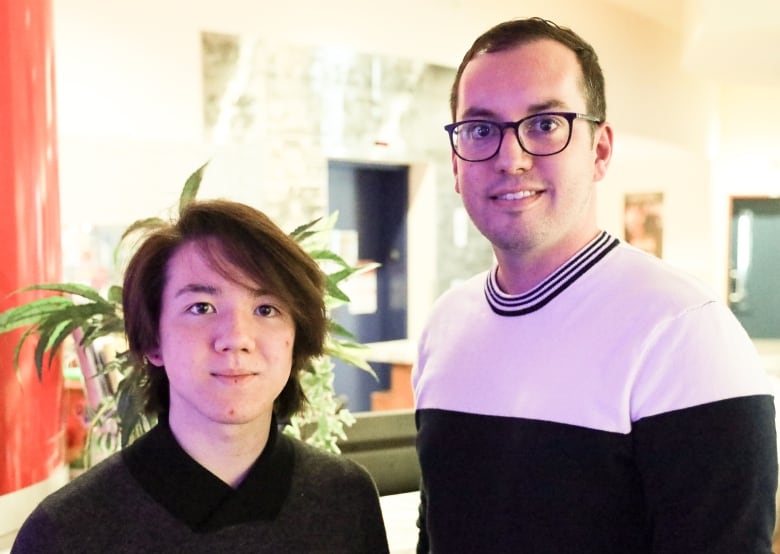 Zac Yeun, a student at M.E. Lazerte School, will be part of Friday’s walkout. Kevin McBean is the faculty sponsor for the school’s GSA. (Ariel Fournier/CBC)

Grade 12 student Zac Yeun, a member the M.E. Lazerte GSA, fears that some of his friends would be at risk if they were outed by staff.

“I know more than a handful of individuals who have really rough home lives and they have not come out to their parents,” Yeun said.

“This is one of the only places they can express themselves [and] be themselves, because they have horrible lives, they get hit.”

High school kids across Alberta plan to walk out tomorrow in support of GSAs. We talk to a teacher and student from M.E. LaZerte. 7:28

McBean also said that as a teacher he would share information with parents if a child was harming themselves, but he saw no need to inform parents about their involvement in a club to do so.

In Devon, Sutherland said, the community has been largely supportive and she hasn’t dealt directly with homophobic or transphobic remarks from other students since her high school’s GSA formed.

But not all students are interested in participating in the walkout, she said.

“I’ve heard from a few people who aren’t thrilled with the idea of the walkout,” Sutherland said.

“Somebody argued with me that they think that people should just be openly gay. And that’s OK. They didn’t really understand.